The Aroma Arch 150SB a great entry level rice cooker which also serves as a food steamer. This is also one of the cheapest ones you can buy that won’t break the pocket book.

This is where all the fuss started from. The new Aroma rice cooker offers a pretty sophisticated deal for its price tag, but it’s been bullied for being mediocre and not pushing limits like the brand is known for.  So, we have decided to put an end to all the unnecessary debate by evaluating if the product is worth your money or not in the following Aroma rice cooker review. Make sure you read it all. 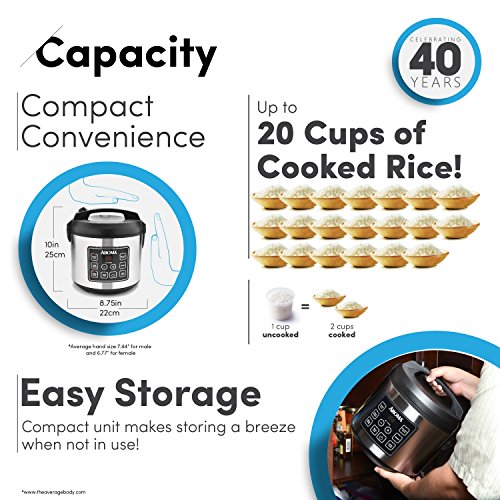 Aroma Housewares gives a pretty decent deal considering the entry level price. You are getting a digital cooker that can cook more than white and brown rice. It’s a functional digital cooker that helps you blow off the steam as it eases up your cooking. The rice cooker is perfected to help you make different dishes including meat and vegetables. It helps you to make up 20 cups of rice. It features specialized functions to make brown and white rice. A perfect appliance for someone who eats rice on a daily basis!

It comes with programmable steam that changes this rice cooker into a digital food steamer which can steam up to 30 minutes. This is great for preparing an exotic meal without blowing off money. The Aroma does deliver value for this rice cooker
Features List

Aroma Arc-150SB has made quite a name for a brand and people have great faith in it. This among those names that customers know they will get their money’s worth from. This is the same in this rice cooker case. The only buzz was this product was only good enough, not great as everyone was expecting from the company.

Still, look at what you are getting for the price tag. These are some of the premium features you will find in an entry level cooker. Even high-end brands are not offering pre-programmed settings and control panel with LED screen at this price. The Aroma Housewares is different and offers you the best features possible for such a price. Don’t forget, this all comes with Aroma’s reliability, and you can’t doubt that this product will see you through at least a year. This may be the best rice cooker at the entry level end.

All in One: This is an all in one package as it cooks a lot more things than just rice. You can cook soup, stew, and steam with this at such an affordable price.

Easy to Use:  It features a user-friendly control panel. Moreover, you can easily disassemble it to clean. Don’t forget; it’s perfectly dishwasher safe.

Comes with a Ton of Accessories: Prepare yourself for a great value for your money! The Aroma cooker comes with different detachable parts. Spoon, and steam basket. Do you need anything else?

Different Functions: It features over six different pre-programmed settings. These settings accommodate you to prepare different delights with this including white rice, brown rice, stew, etc.

LED Display: The Aroma Cooker comes with an intuitive control panel and LED display, this makes the cooker a charm to use!

The rice cooker has surprisingly has a high rating among previous customers on Amazon. This makes it one of the highest-rated and best-selling product on the site. The Aroma cookers are known for the stability and features. For less than $100, this rice cooker packs some heat, and the following buyers agree with this!

It’s not bad for fifty bucks, nor is this the best rice cooker available about there. But for the price, it’s worth the hassle. The problem is, it showed some technical issues after six months of use, got it worked, and it works like a charm.

The only thing I liked about its spec was the brand name. Aroma is known for making reliable appliances, but it falls short on this. It’s not a bad product, but it won’t exceed your expectations, still worth the money.

The price won’t hurt considering the features and built. It’s better than having a cheap cooker in your kitchen. It got some pretty decent features for the price and will see you through a year or two.

While the Aroma Cooker is considered to be an Entry model, it is a bit expensive as compared to the cuckor rice cooker. The competitor brands are offering the somewhat better product as considering the specs and built, and many customers have brought this point.

It may seem valid to an extent, but the fact can’t be ignored that Aroma cookware are reliable and this cooker is no exception. While this is not the most impressive rice cooker in the market, it will give you great value for its price. It does justice for the money you pay.

There is some criticism surrounding Aroma Rice Cooker review. This is mainly due to it being an entry model from a sought-after brand and being a bit expensive than other products in this section. Despite that, there is no argument over the fact that it makes perfect rice, stews, and steam. This cooker does a lot more than just cooking white and brown rice, making it worth of your money.

While the fact stands that this is not the best looking, most reliable or highly advanced cooker in the market, you can’t ignore the fact that it offers great value and features for what you pay. It features somewhat premium features as what you will expect in this section. So paying a bit more scratch for that shouldn’t bother you. So, if you want to have a decent rice cooker in your kitchen but can’t spends more than 50 bucks, then this is your best choice.